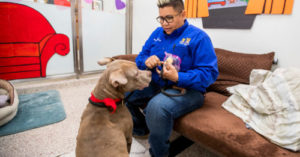 The week leading up to Valentine’s Day can be a difficult time to be alone. But any time at all living alone in a small kennel in an animal shelter can be difficult for homeless dogs. Especially when that dog has lived in that kennel for a long time. Tessa, a Pit Bull at Pima Animal Care And Control in Arizona, is a longterm resident there. One shelter worker knew that was through no fault of the dog’s own.

That person is Michele Figueroa, and she has worked at PACC for 15 years. She knows the animals well and she knows what’s good for them. That’s why she was thrilled to volunteer to turn Tessa’s kennel into a family home for a week.

From February 10th at 5pm, all the way through Friday the 14th (Valentine’s Day) Figueroa remained in the kennel each night with adoptable Tessa. The goal of her stay was to demonstrate how much more a dog comes out of its shell in foster care than alone in a crate.

“You can get a live look at why we push fostering so heavily. As nice as the shelter is, it still doesn’t beat a quiet, restful home with you.”

The shelter set up the kennel like a little apartment for the two of them. The walls featured apartment decor including a fake fireplace and lamp.

They also “admitted” Figueroa as a dog with her own behavior chart and animal ID!

Since she can’t make herself quite as comfortable as pups manage to on floors, Figueroa had an air mattress to sleep on. She also had a phone and laptop with her to document her experiences living with Tessa via Facebook live stream.

“It’s been a long day, but I’m hoping the next few days bring a little more light to the situation.”

Often dogs that remain in shelters longer than others are victims of poor first impressions. But who could show off their best self in a strange place behind steel or glass? The stress of shelters can negatively affect a dog’s behavior. In turn, that makes them harder to adopt.

Figueroa’s videos of Tessa in their little “apartment” showed off the pup’s sweet snuggly side. That’s something most people passing through the shelter wouldn’t get to see. They also brought in money for the shelter’s foster program.

You can still donate any time to support Tessa, the shelter, and wonderful caring volunteers like Michele Figueroa. Better yet, consider opening your home and heart to a foster dog!