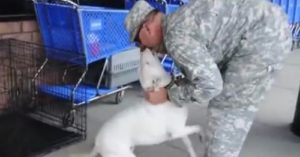 A deaf Terrier Mix named Noelle was a bit bummed out when her dog dad had to leave her to head off to his army training mission. Though her fur dad set her up in a home with close friends while he was away, Noelle certainly counted down the minutes until she would see her favorite human again.

The family that watched Noelle while her fur dad was away is so involved in animal care, that they volunteer regularly at their local PetSmart adoption center. During Noelle’s stay with the family, she was able to tag along on each adoption event and see off her fellow canine friends as they set off to their forever homes.

Going to adoption events became so normal for Noelle that she did not suspect a thing as she tagged along on yet another PetSmart adventure. What Noelle didn’t know, however, was that a huge surprise was coming her way.

Noelle laid patiently in her crate as she always did during these events, and watched as each of the eager pups walked away with their new families. It’s almost as if Noelle laid there daydreaming about the fur dad that was so far away, and waiting for the day they would be reunited again.

As Noelle sat there in a silent daydream, the grand surprise began to come together. Her fur parent finished his army training a few days prior, and was about to walk up to the PetSmart event to greet his favorite girl!

Of course, Noelle didn’t hear her dad coming, but once she locked eyes with him, she immediately knew her dreams had come true! Her fur dad was home, and she was ready to run into his arms and give him all the puppy kisses he had missed during his time away.

The second her crate door was opened, she jumped into her fur dad’s arms and smothered him with love. Her cries of excitement were unmistakable, and it was clear just how much this pair missed each other.

Their heartfelt reunion was so adorable that every passing shopper couldn’t help but stand and watch. The bond that these two share is one of a kind, and we are so happy that they are finally reunited! We have no doubt that Noelle is currently snuggled up with her dog dad, just soaking up every second of love she missed out on during his time away.